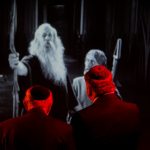 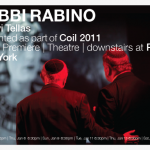 In RABBI RABINO, renowned Argentinian director Vivi Tellas «kidnaps reality”, placing two
Conservative Rabbis onstage to perform their own autobiographies – ranging from jokes to
Jewish food to providing the voices for the 1923 silent movie “The 10 Commandments.” On
the threshold where simple reality transforms into performance, RABBI RABINO captures
pieces of “theatricality outside the theatre”, placing them onstage in a unique context where
audiences can connect with “the Rabbi’s world” in a whole new way.
Vivi says about RABBI RABINO:
«As a Jewish person without a Jewish education I always felt very curious and had great
attraction to the whole mise en scene of the synagogue.  As a theatre director this feeling was
enough to make me think of starting my research on the “Rabbi’s world”, as part of my
documentary work. I am looking for the most theatrical moments in the life of a Rabbi, and to
examine certain questions….
Is theatre true?
Rabbi Murray said that God is a voice.
Rabbi Ellen said God is “feeling right”.
Rabbi Jan said God is memory.
Rabbi Moshe said God is being Jewish.
Rabbi Hy said God is the essence.
How does a person get to be a Rabbi?  Is there a sign?
Is there a moment of revelation?
What does it mean to be a Rabbi?  Is it a responsibility?  A calling?
Moses heard God’s voice for the first time coming from The Burning Bush.  A bush that never
burns down. Did Charlton Heston hear God?
Are Jewish jokes the best jokes on earth?
How many times can a Rabbi fall in love?
What does it mean to be chosen?
Why is Hollywood a Jewish invention?»